Surendra Basnet Is A Executive Vice President Of The Youth Council 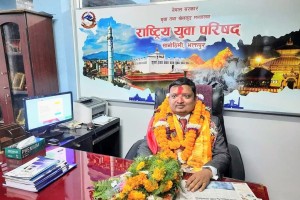 Basnet is also a member of the missing family. One of his brothers and one of his brothers have been disappeared by the state during the People's War. The leader who emerged from the student movement was for a long time the senior vice president and spokesperson of Akhil Krantikari. With the election of the new leadership of the Krantikari, the leaders including Basnet had participated in the recently concluded general convention as the central representatives of the party.

Basnet, who is pursuing a doctorate from Tribhuvan University, has a master's degree in political science and journalism. A brother, a brother and a father of Basnet, a permanent resident of Jhapa and a temporary resident of Bhaktapur, are still active in the Maoist center politics.