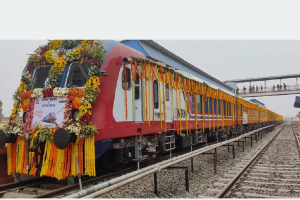 Kathmandu. After a long wait, the train has reached Janakpur with the inauguration of the railway service from Kurtha in Dhanusha to Jayanagar in India.
The train has reached Janakpur after the Prime Minister of Nepal Sher Bahadur Deuba and the Prime Minister of India Narendra Modi jointly inaugurated the virtual train service from Hyderabad House in New Delhi. The Prime Ministers of both the countries had inaugurated the train service by showing the green flag.
After the inauguration by the two Prime Ministers, the train decorated like a bride was opened from Jayanagar. Nepali students and locals carrying the national flags of both the countries at each station greeted the team including General Manager of Nepal Railway Company Niranjan Jhas, who boarded the open train from Jayanagar to Kurtha.
A new fare has been fixed for the train service from Jayanagar to Kurtha. The Janakpur-Kurtha-Jayanagar general seat has been fixed at Rs 90 per passenger and AC seat at Rs 450 per passenger. The distance from Jayanagar to Kurtha is about 35 kilometers.