Election Code Of Conduct Being Implemented 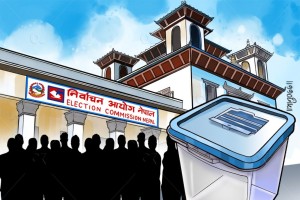 Kathmandu. The code of conduct for the local level election to be held on April 12 is being implemented from midnight today. The Election Commission, which has already signed the letter of commitment to the political parties to abide by the code of conduct, is going to implement it from midnight today till the polling day.
After the implementation of the code of conduct, it is not allowed to spread inflammatory propaganda in favor of any party or candidate. It is also forbidden to hold meetings, processions, meetings, gatherings etc. in public places without the permission of the local administration. The administration and police should be informed 72 hours before any event.