Army To Be Mobilized In The Local Level Election 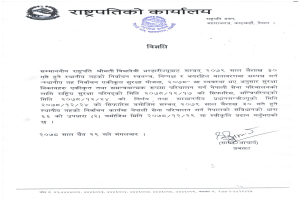 Kathmandu. The army will be mobilized for the local level elections. For this, legal procedures have been completed and preparations have been made.
President Vidyadevi Bhandari has already given approval to open the way for army mobilization. She has given approval for the mobilization of the army as per the decision of the cabinet meeting held on April 8.
Spokesperson of the President's Office, Sagar Acharya, said in a press release that Article 66, Clause 2 of the Constitution of Nepal has been approved to mobilize the Nepal Army in the local level elections. The government has already decided to mobilize the Nepal Police and the Armed Police Force in addition to the 100,000 temporary police personnel. The army has also opened the way for mobilization.